Along with the new music, compelling acoustic videos of all the songs being sung by the artists were recorded and are featured on a companion Simple Hymns: Songs of Thanksgiving Digital Deluxe version of the album that is exclusively available from Apple Music and iTunes.

Songs of Thanksgiving is the third of several new recordings in the Simple Hymns series to release over the next year. The new album follows the Songs Of Worship (Oct. 4) and Songs Of Redemption (Aug. 30) albums that are available now at Christian retailers and Amazon.com. These recordings feature such acclaimed worship leaders as Mack Brock (Elevation Worship), Chris McClarney, Paul & Hannah McClure (Bethel Music), Dan Koch, Aaron Keyes, Sean Carter and many more.

Each new recording in the Simple Hymns series combines classic Hymns with a fresh interpretation, some with additional lyrics, as well as new songs that have been written and recorded in a hymn-like style and focusing on the Majesty and Greatness of God.

"Simple Hymns is a response to those that long for a return to a richer and more lyric focused worship expression, combined with a simplicity of musical instrumentation," shares Venture3Media president and founder Steve Nicolle. "Worship music shifts in style from decade to decade, along with shifts in lyrical themes and focus. What makes the hymns so unique and special is their ability to stand the test of time. When times become more turbulent or uncertain, we tend to hold to things that have endured. Hymns give us that anchor, and remind us that God's love and His nature are unchanging."

Some of the hymns in this third Simple Hymns installment include classic songs written by Fanny Crosby ("Sing All The Earth"), Charles Wesley ("Rejoice, The Lord Is King"), Ludwig van Beethoven ("Joyful") and more, all given modern interpretations by today's songwriters like Brenton Brown, John Hartley and Ian Cron.

The recording also features the new hymn "Come People Of The Risen King" written by Keith & Kristyn Getty and Stuart Townend and recorded by Barrett.

"These hymns and videos are purposefully simple with acoustic instrumentation, nothing overproduced to allow them to be sung by worship leaders in the most unplugged setting, or added to the worship music song selections in any sized church," says Nicolle. "These Simple Hymns are also well suited as a background for personal worship, reflection and devotions."

Future Simple Hymns releases that are already being developed will feature hymns set around communion, praise, Christmas, Easter and more. 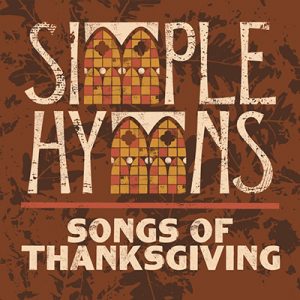