37 years ago in May 1984, Lee Greenwood released his signature song "God Bless the U.S.A.."  The iconic song was written by Greenwood and helmed by his long-time producer Jerry Crutchfield. Here are 7 interesting facts regarding the song that you may or may not know about.

1.  "God Bless the U.S.A." may be Greenwood's most popular song but the song never made it to #1. The song was initially included on Greenwood's 1984 album You've Got a Good Love Comin'. It only reached No. 7 on the Billboard magazine Hot Country Singles chart in 1984. Greenwood has had songs that performed better on the chart, yet none of those hits can ever eclipse the popularity of "God Bless the U.S.A.."

3. Greenwood first wrote the song after hearing the news that a Soviet Su-15 interceptor shot down Korean Air Lines Flight 007. Greenwood said that he "wanted to write `God Bless the U.S.A.' all my whole life. When I got to that point, we were doing 300 days a year on the road, and we were on our fourth or fifth album on MCA. I called my producer, and I said I have a need to do this. I've always wanted to write a song about America, and I said we just need to be more united."

4. The song mentions a number of American cities by name. Greenwood explains how those cities made it into the song. "I'm from California, and I don't know anybody from Virginia or New York, so when I wrote it-and my producer and I had talked about it-[we] talked about the four cities I wanted to mention, the four corners of the United States. It could have been Seattle or Miami but we chose New York City and Los Angeles, and he suggested Detroit and Houston because they both were economically part of the basis of our economy-Motortown and the oil industry, so I just poetically wrote that in the bridge."

6. In 1989, Greenwood released a Canadian version of this song called "God Bless You Canada." In 2003, the finalist of American Idol season two recorded the song and it raised $155,000 for the American Red Cross. The song even reached No. 4 on the Billboard Hot 100.

7. This is what the cover of the original single looks like: 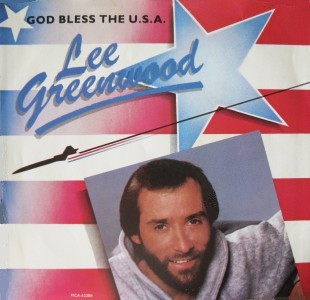